When to travel to Peru?

The three geographical zones in Peru each have their own climate, which gives you a unique opportunity to experience weather conditions of a very different nature on your journey. In general, however, the high season can be said to be between June and September, which is the dry period in Peru, where the low season can be said to extend from November to April, as this is the rainy season in Peru. However, there is something very special about both the dry and wet period, so no matter when you travel, there are guaranteed to be unique experiences ahead.

From April to May and in October it is spring and autumn in Peru, and here the weather is extremely sporadic, and it is therefore not possible to generalize the weather conditions in these months. If you travel at these times, you can expect everything from no rain to daily rain showers and relatively low temperatures to heat waves, where the other two periods are relatively stable.

General about climate and weather in Peru

The three geographical zones of Peru mean that the coast, the highlands and the jungle can be vastly different when it comes to weather and climate. Off the coast, including in the capital Lima, the summers are hot and dry with temperatures stable from the mid-20s to the mid-30s, however cooler the rest of the year, with average temperatures in the winter months of around 19 degrees Celsius.

Up in the mountains themselves it is somewhat cooler, and the higher you get up, the more the temperature drops. The rainy season is from December to February, during these months an average of 150 mm of rain falls per month. Peru is a large country with many altitude differences, which is why it can be difficult to say how the temperatures are for the whole country.

In the jungle it is always hot and humid, where the greatest chance of dry weather is from April to October. It is characteristic that when it rains, it rains heavily, preferably for a few hours, and then it clears up. In the valleys you can expect about 20-25 degrees in the summer season, but the temperature drops sharply at night, with a drop of down to 15-20 degrees at night is completely normal.

The coastline is generally warm in Peru, and here it rarely rains. In the north it is mostly sunny and dry, which is why you will find the best beaches here. It is a bit windy on the coast, but a few kilometers inland, the weather will feel much warmer.

Lima is located on the coastline. Therefore, we have taken as our starting point the temperature in the capital. It’s not too hot to explore the city, nor is it too cold to soak up the sun on the beach.

Along the entire west coast of South America, the vast Andes Mountains unfold. Both Cuzco, the Sacred Valley and Machu Picchu are located high up in the mountain range. The climate in Cuzco and the Inca ruins is therefore different from that of the rest of Peru.

In Cuzco, large temperature fluctuations are experienced daily. The temperature in the city is rarely above 20 degrees, but it usually feels warmer. You must therefore make reservations for both cold and warm clothing when you go out into the mountains.

In the world’s largest rainforest, the Amazon, the water seeps into torrents. However, it lasts for quite a few hours, after which the sky quickly clears up. The humidity in the Amazon is therefore extreme – despite a daytime temperature of around 35 degrees.

The rainfall varies depending on where in the Amazon you are. In the Iquitos area, the rainfall is fairly constant. here it rains on average 239 mm every month. In Puerto Maldonado, it rains “only” 180 mm a month.

Popular animals you can experience in Peru

With a varied terrain comes several animal species, most of which have a special connection to South America. When you go on a tour of Peru, you will be able to experience as many as 120 bird species among a myriad of mammals, reptiles and reptiles. In the Amazon, otters, ozelots, monkeys and parrots live wild, while in the mountain pass at Cordillera Blanca live cougars, jaguars and tapirs.

At the other end of the Andes Mountains at the Colca Canyon Gorge are the condors, giant hummingbirds, llamas and chinchillas. A few hours drive from Lima lies the Ballestas Islands, described as Peru’s answer to the Galapagos. The Ballestas Islands are for any bird enthusiast a piece of heaven on earth. Here are a myriad of bird species that abound with the many sea lions and penguins. 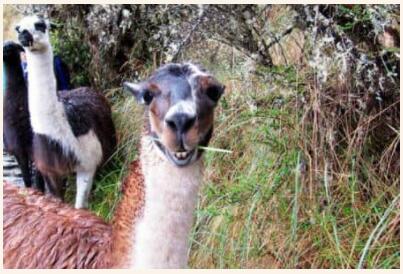 Weather and Climate in Peru
Tagged on: Peru